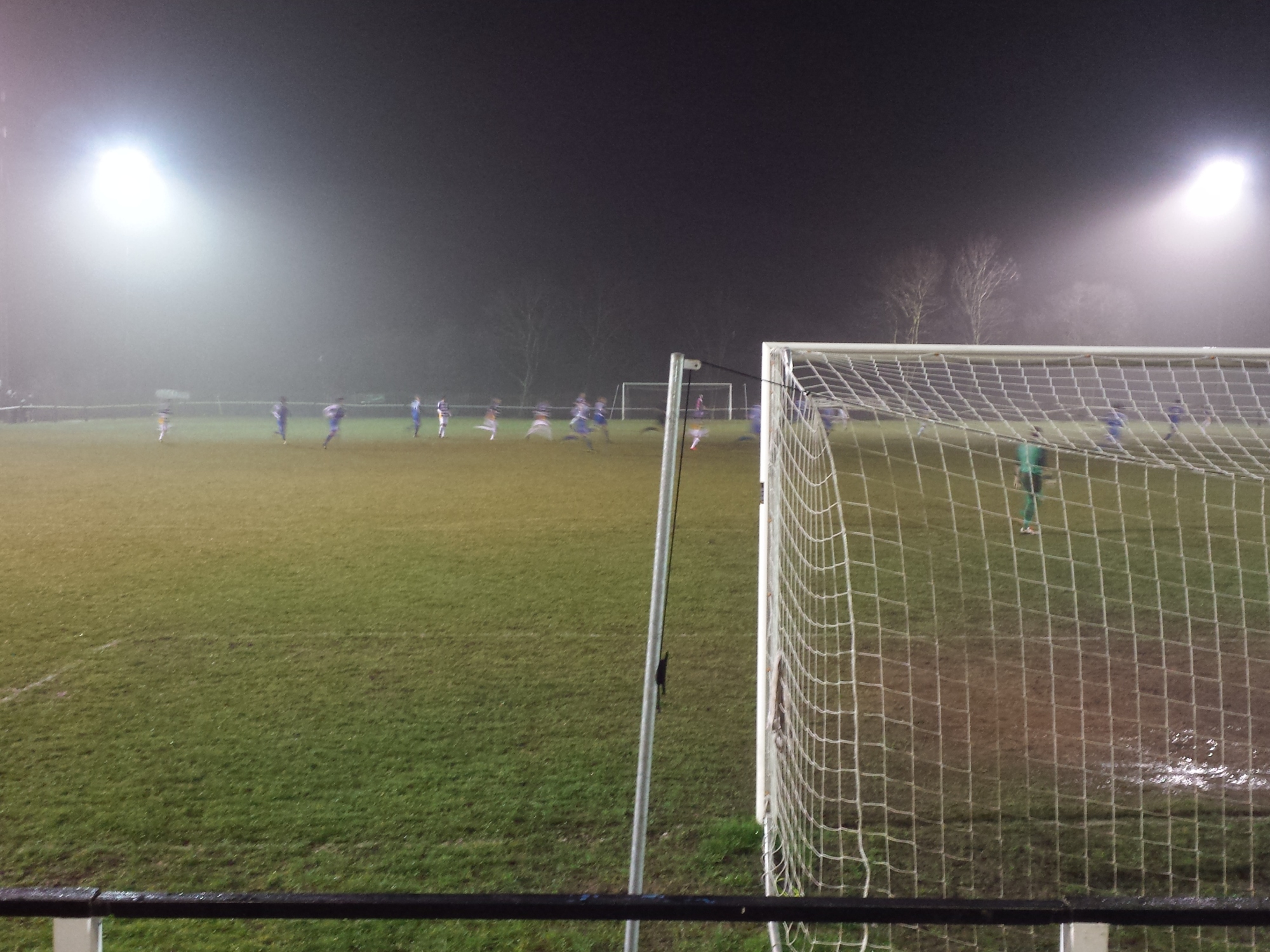 It’s Tuesday night, and after a day at work I’m looking forward to seeing some live football action, in the relative mild of a February night. The fixture is in place, the usual suspects I spend my Saturday afternoon’s with are assembled, all we need now is to monitor the weather. And this is where the plan comes crashing down. Steady rain since the night before puts paid to the fixture, confirmed on Twitter from the clubs official account. All the rushing around at work, to make sure I can make my lift to the game, is all in vain. I slump back in the van seat, a mild expletive passes my lips at the news. My first postponement of the season. Not bad all things considered, it is early February after all. At the time of writing this – some four hours later – I can almost see the funny side. At the time, the news felt like a death in the family. Ok, that bit may be a tad dramatic, but if anyone needed a night out at the football, it was me.

Rewind 24 hours. Plans have been put in place for a few of us to attend Hall Road Rangers vs Winterton Rangers. No, I know, it’s not the Champions League. Nor is it the Premier League ( thank God ). But to me, and probably another 60 or so hardy souls, this is the version of the Beautiful Game we like to watch. The fixture in question is a Northern Counties East League ( Step 6 ) game. The Home side are having one of their best seasons for a long time. In fact, for as long as I can remember. I’ve watched Rangers for around seven or eight years now, a local alternative to my team – North Ferriby United – and a cheaper option – financially might I add – than my local pro side( and my first love ) Hull City. At Hall Roads previous ground, Dene Park ( vacated 2 years ago for the bigger and better Haworth Park ) I watched arguably one of the best games I’ve ever seen. I remember the year, because it was Hull City’s first year in the Premier League, 2008/09. However, that also marked the start of my sabbatical from the KC Stadium, home of The Tigers. I won’t bore you all with the details of why, it’s old ground, and one no doubt you’re all fully aware of. And this isn’t about Hull City. I think Rangers opposition that day was Armthorpe Welfare. I say think, because my memory is terrible. For the purposes of this article, we’ll go with Armthorpe ! The game in question finished 4-4. The Away side taking a 3-0 lead, before being pegged back to 3-3. With five minutes left the visitors were ahead again, before a last minute equaliser made it 4-4. The drama didn’t end there, an injury time penalty awarded to the Home side saw hopes of an undeserved win, only for the resulting spot-kick to hit the post, closely followed by the referee’s Full Time whistle. In between all the excitement, 2 players had gone for an early bath as the tackles flew in – no writhing around here looking for bookings though – pride, and the cajoling of teammates saw to that. I walked out of the ground £5 lighter in the pocket, but enriched in a superb 90 minutes of entertainment. As I made my way to the car, my phone rang. It was a mate of mine who had been to the KC that afternoon, watching City. He sat through a 0-0 bore-draw, and paid over thirty quid for the privilege. I chuckled to myself….

I’ve gone off on a tangent there. Where was I ? Ah yes, Haworth Park. It’s the Humber Classico ( North bank versus South bank ) or at least it was supposed to be before the heaven’s opened for 24 hours, putting paid to the fixture. Back to the drawing board for my football fix. Nothing else local that we can get to, so it’s a night in front of the TV. It’ll be a further 10 days before I get to another game, my new job working alternate weekends is playing havoc with my social activities. It’s enough to drive anyone mad ! And that’s where my midweek sojourn to the far reaches of the city – and of the football pyramid – was to be my saving grace. For as long as I can remember I’ve loved football under floodlights. Whether it was a poorly attended game at Boothferry Park, or a sell out at the KC, nothing beats a night match. The sights and sounds of a match day are multiplied 10 fold in the cold and dark of a Winter’s night. And nothing beats a midweek match when you’ve been starved of one the previous Saturday, this time due to a rescheduled fixture. Ever felt the fixture God’s just aren’t on your side ? I’ve gone a week here without a game, and it is the footballing equivalent of a drug addict going cold turkey, I would imagine. I’m in need of some medical help, in the form of live football action. Unfortunately, it won’t be this Tuesday. Instead, I’m sat in the warmth of my living room, passing pleasantries with the missus, flicking the TV remote in the hope there’s something decent on. It’s a pointless exercise. Up comes medical drama Holby, formerly Holby City. The name was changed after complaints from United fans. Joke. One of the patients in the medical drama is asking for his medicine. It’ll be a week on Saturday before my medicine is administered…..